Recently, EA announced some of the first specific information about what’s planned for the Star Wars Battlefront DLC campaign.  After a few free updates (including two new maps), the first paid expansion will roll out in March, with maps in Tatooine and Sullust, followed by three more expansions over the course of the year that will take the action to Cloud City, the Death Star, and other, as-yet-unknown locations.  There’s not much information, but it’s enough to get excited for.  And, more importantly, it’s enough to speculate about, which is where the real fun is.  So let’s head over to Speculation Corner and see what ideas we can stir up.

We’ve known since the game’s launch that the season pass would give us sixteen maps, four heroes, four new game modes, and “over twenty” weapons, vehicles, and star cards spread over its four expansions.  The easiest bit of speculation is to assume that this content stuff will be distributed evenly among the expansions: four maps, one hero, and one mode in each pack, plus, say, one vehicle, two guns, and two or three star cards.  Because there’s so much variation in how many maps support each game mode, I could see a scenario where one expansion has three maps and another has five, but for simplicity’s sake let’s assume this isn’t the case.  With these safe assumptions and the few clues we have, we can imagine some plausible scenarios for what exactly this DLC is going to look like.

END_OF_DOCUMENT_TOKEN_TO_BE_REPLACED

Star Wars Battlefront is not the best first-person shooter out there.  Let’s get that out of the way right up front.  It’s a relatively stripped-down game that doesn’t do enough to make up for its shortcomings.  From a purely mechanical standpoint, any number of other shooters on the market will provide a more satisfying experience.  Battlefront’s biggest asset, and one major advantage over other shooters, is its ability to transport you to the Star Wars universe.

And I cannot be objective about anything set in the Star Wars universe.  We should get that out of the way up front, too.  The Star Wars movies are so ingrained in my psyche, so elemental to my artistic sensibilities, that any book, movie, game, TV show, interpretive dance, etc., set in that universe gets a handful of bonus points and get-out-of-jail-free cards.  Just being in the Star Wars universe for a while is an experience I enjoy, regardless of the quality of the work that’s brought me there.  I saw The Phantom Menace six times in theaters, for example.  So my opinion of Battlefront won’t necessarily be objective, inasmuch as such a thing could actually exist.  But mine will be the opinion of a pretty passionate Star Wars fan. 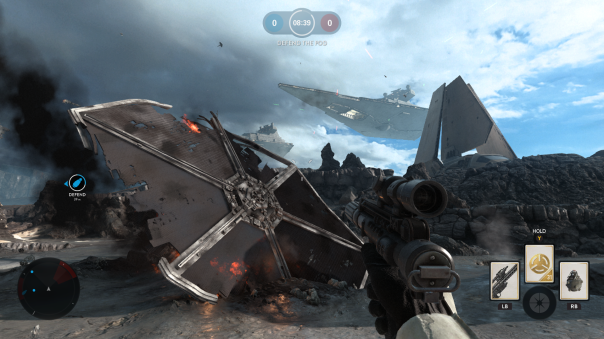 The first thing you notice about Star Wars Battlefront is how beautiful it is.  Heading into the third year of this new console generation, with developers starting to leave the last generation of hardware behind, we’re getting used to seeing breathtaking graphics in new releases, but Battlefront seems to vastly exceed our still-nascent expectations of what a current (née “next”) generation game should look like.  Not only is the game as close to photorealistic as anything we’ve ever seen on a console, but it captures the specific look of the original films.  It doesn’t feel like real life; it feels like a movie.  This effect is somewhat owing to the photogrammetry process developer DICE used to capture original props from the movies.  Those Stormtroopers look just like their cinematic counterparts because they essentially are wearing the exact same costumes.

This attention to detail extends beyond the graphics to the sound design, animations, music, and visual effects.  Ewoks scatter when you run through the Endor treetops; Tusken Raiders shout from atop Tatooine ridges; Stormtroopers are animated to move not like hyper-athletic videogame characters, but actors wearing plastic costumes; the Wilhelm Scream is everywhere.  Every effort has been made to create as authentic and immersive a Star Wars experience as possible.  And those efforts have largely succeeded.   It is still a videogame, of course.  You will still get shot in the head by a Stormtrooper named something like DeezNutz69xxx69, which kind of breaks the illusion a bit, and you will eventually settle into a familiar headspace of worrying about spawn points, power-ups, K/D ratios, and everything else that comes with playing an online shooter.  But it will also feel more like Star Wars than just about any game you’ve ever played. END_OF_DOCUMENT_TOKEN_TO_BE_REPLACED

After a surprise countdown showed up on Bethesda’s website yesterday and sent the Internet into a tizzy of Fallout 4 anticipation, the game’s official trailer dropped this morning.  It hits all the familiar notes, has a next-gen level of polish (kind of), and shows off a post-apocalyptic Boston.  There are a lot of fun little nuggets buried in this trailer, and now that I’ve had almost two hours to pore over it, here are my first impressions.

First, here’s the trailer, in case you missed it somehow:

This first thing that struck me is the vibe of the trailer.  It reminds me quite a bit of the excellent trailer for The Division that Ubisoft showed at last year’s E3.  That trailer had a camera sweeping through an unpeopled New York while a cool time-lapse effect showed the unfolding of some catastrophe through insinuation:

The Fallout 4 trailer achieves a similar effect, albeit with more conventional filmmaking techniques, cutting back and forth between the pre- and post-apocalyptic versions of Boston.  You see an empty crib in a dirty, abandoned bedroom, and then you see parents cooing over a newborn in that same crib.  I like getting these glimpses of the pre-apocalyptic, retrofuturistic world, and I wonder if we’ll get to visit that world in the game. END_OF_DOCUMENT_TOKEN_TO_BE_REPLACED

The Star Wars Battlefront trailer dropped today at the Star Wars Celebration event.  I don’t really have anything insightful to say about this, and keeping you updated on breaking news isn’t really the point of this blog, but I’m too excited for this game to not post something about it.  With the new Zelda game delayed into 2016, Battlefront is officially my most-anticipated game of 2015.  I’m trying to go full embargo on Episode VII – a task that’s proving a lot harder than it was in 2005 for Episode III­ – so, after an excruciating day yesterday of seeing everyone on Facebook super jazzed about the footage that I won’t see (Internet willing) until December, it’s nice to have a Star Wars trailer I can watch.  Over and over.  And what a trailer!

They’re emphasizing Endor here (or the Sanctuary Moon, if you prefer) because, I’d assume, it shows off the Frostbite engine a bit better than the frozen expanse of Hoth does, and the speederbike chase in Return of the Jedi is one of the best action scenes ever put to film.  The trailer advertises this as in-engine footage and, according to Gamespot, the video is from a PS4.  While that isn’t the same thing as gameplay footage, it still should be pretty representative of what the final game looks like.  Right?  There are supposed to be 40-person battles in this thing, and I didn’t see anywhere in that trailer where the system was rendering anything close to 40 people at once, so I expect a bit of a fidelity drop, but I still think this will be pretty close to what gameplay looks like.  E3 is in two months, and I’d imagine that Battlefront will be playable there, or that there will at least be a much more in-depth look with extended gameplay footage.  When studios release crazy, pie-in-the-sky pre-rendered videos of what they hope a game might possibly but definitely won’t actually look like, it’s usually a few years out, not a few months before playable demos are due. END_OF_DOCUMENT_TOKEN_TO_BE_REPLACED