Recently, EA announced some of the first specific information about what’s planned for the Star Wars Battlefront DLC campaign.  After a few free updates (including two new maps), the first paid expansion will roll out in March, with maps in Tatooine and Sullust, followed by three more expansions over the course of the year that will take the action to Cloud City, the Death Star, and other, as-yet-unknown locations.  There’s not much information, but it’s enough to get excited for.  And, more importantly, it’s enough to speculate about, which is where the real fun is.  So let’s head over to Speculation Corner and see what ideas we can stir up. 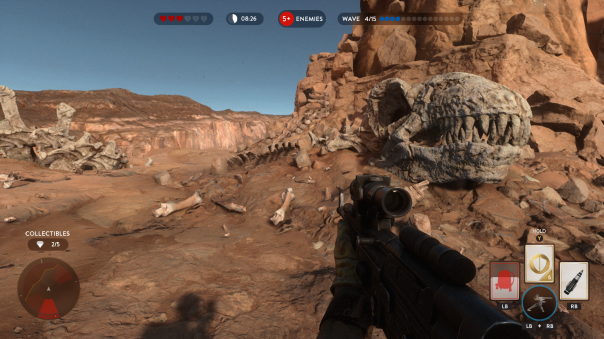 We’ve known since the game’s launch that the season pass would give us sixteen maps, four heroes, four new game modes, and “over twenty” weapons, vehicles, and star cards spread over its four expansions.  The easiest bit of speculation is to assume that this content stuff will be distributed evenly among the expansions: four maps, one hero, and one mode in each pack, plus, say, one vehicle, two guns, and two or three star cards.  Because there’s so much variation in how many maps support each game mode, I could see a scenario where one expansion has three maps and another has five, but for simplicity’s sake let’s assume this isn’t the case.  With these safe assumptions and the few clues we have, we can imagine some plausible scenarios for what exactly this DLC is going to look like.