This is the question that’s been ricocheting around the Internet for months now, ever since EA announced (and then aborted) a rather pernicious microtransaction model for Star Wars Battlefront II.  Gaming sites, comments sections, podcasts, and forums abound with think pieces and hot takes on the subject.  Legislators have even jumped into the fray, with bills regulating randomized rewards being introduced in Hawaii and the Dutch gambling authority taking aim at the practice.

For as long as there have been microtransactions in games, there have been controversies about said transactions.  But recent events – such as loot chests in the single-player Shadow of War and the aforementioned EA debacle – along with the general growth of the practice have brought the issue to the fore.  In addition to predictable comments about canceled preorders and lamentations for The Way Games Used To Be, the conversation has centered on the question of whether or not loot chests constitute gambling.  Everyone seems to agree that this is the key issue; the only debate is whether we should call them chests, crates, or boxes. 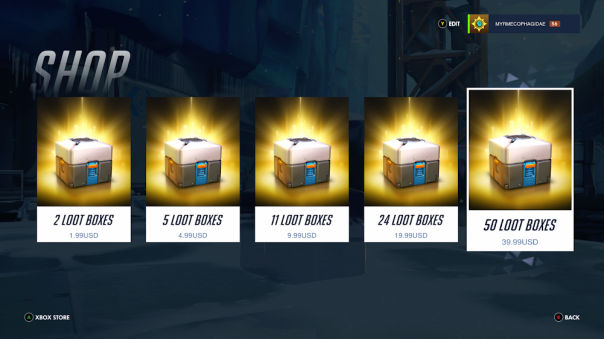 But debating whether or not loot chests are gambling misses the point.  Ultimately, answering the question will tell us far more about gambling laws than it will about loot chests.

As a practical matter, it seems unlikely that the courts would consider loot chests a form of gambling.  (At least in the U.S., where I live; I don’t know much about the legal systems elsewhere.)  For one thing, you always receive something of value when you buy a loot chest; it may not be what you want, but you never just lose your money, the way you do in, say, roulette.  To legally define this as gambling would seem to require the government determining that that sweet Roadhog skin has more value than your ninth Zenyata spray, which is a much trickier proposition than figuring out that a thousand dollars is more than one dollar.  On top of this, buying loot chests often involves the intermediate step of buying in-game currency, which further obfuscates the issue.

It’s hard to imagine a definition of gambling that would encompass loot chests, but not baseball cards, collectible card games, blind box collectibles, and so on.  Government inquiries into loot chests, legislative attempts to limit them, and the inevitable court cases to follow seem destined to conclude that they are not, in fact, gambling.

But so what?  What does this mean?  Does this mean that loot chests are not predatory, exploitative, or consumer unfriendly?  Does it mean that they pose no risk for children, people with gambling addictions, or others whose judgment and self-control might be impaired?  Or, consider the opposite.  Suppose that loot chests somehow are considered gambling.  Does that mean that baseball cards are also gambling, and should be regulated as such?  Should kids not be allowed to buy Shopkins?  Is a concert ticket gambling because you don’t know what songs the band is going to play?

No, of course not.  It doesn’t mean any of those things.  All it means is that when we wrote laws to regulate gambling, we wrote them narrowly or broadly enough to exclude or encompass certain other activities.  And as gambling regulation predates microtransactions by decades, the degree to which the former does or does not apply to the latter is a matter of coincidence.  What matters isn’t whether existing gambling laws apply to video games; what matters is why we regulate gambling in the first place.

Some of the reasons we regulate gambling – links to organized crime, history of corruption, association with other vices such as prostitution and alcohol – clearly have nothing to do with buying loot chests on Xbox.  But one reason we regulate gambling is that it is almost by definition predatory.  Casinos, lotteries, and the like exploit your hope to sell you a product that is empirically, mathematically a losing proposition.  And for some small percentage of gamblers, this becomes a debilitating, destructive addiction.

The DSM-5 classifies problem gambling as an addictive disorder; in other words, it is an addiction, not an “addiction,” as in “I’m addicted to the Great British Baking Show.”  After you read a bit about what goes on in a gambling addict’s brain, it’s not hard to imagine that the certain types of microtransactions might provoke a similar reaction.  And not just loot boxes, but other purchases, too, like XP boosts, consumables, in-game currency, and so on.

There doesn’t appear to be much research yet into this problem, so it’s hard to know how closely the two track, but it’s also hard to ignore the possibility that microtransactions may prey on the vulnerable the same way gambling does.  Lately, the games press abounds with stories of gamers struggling to control a microtransaction habit.  (A recent Waypoint article provides a good overview of the problem.)  Microtransactions, for at least a select few, can clearly be predatory and destructive; whether they are technically gambling is beside the point.  Your dopamine receptors don’t care what the statutory definition of gambling is.

One of the most pernicious things about loot chests is not their randomness but, as with many other microtransactions, their infinite availability.  There’s typically no limit to the number of loot chests you can buy, just as there’s no limit to the number of extra moves you can buy in your average match-three mobile game.  Say what you will about traditional DLC – season passes, map packs, story expansions, a la carte cosmetics, and the like – but once you’ve bought them, you can’t buy them again.  Once you’ve spent your thirty or fifty or hundred dollars on all the available extra content, you can’t spend any more.  You’ll never suffer a loss of impulse control and fall into a rabbit hole thousands of dollars deep.  You’ll never buy “just one more” season pass for, say, Fallout 4, because there’s just the one.

This is another way microtransactions resemble gambling.  They’re not just designed to entice you to buy them, as all products are, but to entice you to keep buying them, over and over, ad infinitum.   And this is where their real danger lies.  For a small minority of gamers, microtransactions’ infinite availability will make them an inescapable problem, a persistent threat.  Perhaps science will one day classify this problem as an addiction; perhaps not.  Whether or not microtransactions meet a preexisting definition for gambling, the problem will still exist.

Read all about What I Play When I Play.