I recently had a brief – as in, didn’t finish the game – session of Urbania, and found it to have some promise but also some frustrating aspects.  The game basically pastes some of the basic Ticket to Ride mechanics onto an area control, urban development game.  You collect resources from either a bank of a few face-up cards or from the top of a face-down deck, you acquire secret objectives that you’ll try to fulfill by the end of the game, and you buy stuff off of the map.  There seems to be more depth in Urbania – the resource system is a bit more complex, and there are a few more variables that factor into how you earn points – but it feels pretty familiar in a good way, taking something you know and stretching it out a bit.

The biggest problem with Urbania is the component design.  The most obvious design flaw is how busy the board is.  The main play area consists of a grid of city blocks that you randomly cover with building tiles, Catan style, which have an undeveloped and a developed side.  All of these things – the board, the undeveloped tiles, and the developed tiles – are way too busy.  You need to be able to glance at the board to determine how many buildings of what type are developed or not and where they are, but the board is too busy for you to be able to quickly get this information.  You’ll spend ten or twenty seconds hovering over the board trying to figure out if the move you’re about to make is a good idea or not, and you’ll do this turn after turn after turn.  This ties into another problem, which is that the components’ colors are wildly inconsistent.  Color coding is a huge element in this game; the colors of the buildings relate to the colors of the resources used to build them, and to the specialists who score points from them, and to the wooden cubes and discs that move along scoring tracks.  But none of the colors are the same.  During our playthrough, which was everyone’s first time with the game, our conversations were split pretty evenly between going over the rules, talking about strategy, and asking things like, “Is this red?  Or is that red?  Is there an orange? Or is that pink?” 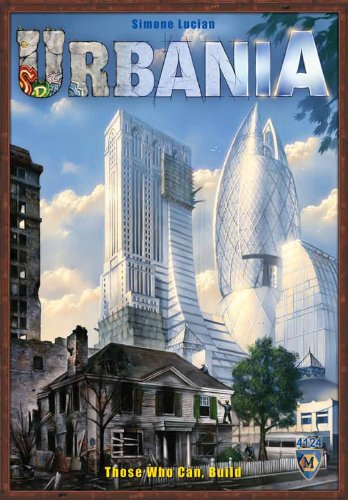 One weird feature of the game is that, though you’re buying real estate (or developing it or whatever), you don’t actually own or continue to control these buildings.  Or even necessarily benefit from them.  You get so many points for developing a property, but then you’re basically done with it.  Once developed, buildings earn points for people based on who (temporarily) controls certain specialists, and help you earn points with your secret objectives.  This isn’t necessarily bad game design, but it does feel weirdly out of sync with the game’s theme.  (But then, I wasn’t the one with the rule book.  Maybe there’s a really logical but abstract explanation that ties the mechanics to the theme.  I mean, I must’ve played Lords of Waterdeep a dozen times before I realized that those little cubes were actually people.)

There are some interesting strategic elements at play in Urbania.  One category of secret objectives requires you to somehow lure other people into trading a certain specialist back and forth, driving up its price.  The game also has you paying for things with victory points, which I don’t think I’ve seen before.  So many elements are interconnected that it can be tough to keep track of everything that’s going on, but it also means that it’s probably tricky to simply math your way through the game.

My first playthrough was the typical first run: I spent the first half of the game or so just learning the mechanics and fumbling with strategy, and by the end I felt I had a good enough grasp of the game to play it competently next time.  I’d like to take another stab at this game now that I know what I’m doing, but I’m also slightly dreading playing it again just because I know the design flaws are going to make the game a lot more frustrating and confusing than it needs to be.